Almost 28,800 people, or 56% of the population, live in households consisting of one or more children.

1,680 people, or 3% of the population, live in one-adult households consisting of one or more children.

Specifications of the terms households and population can be found at the bottom of this article. This survey is from year 2019. 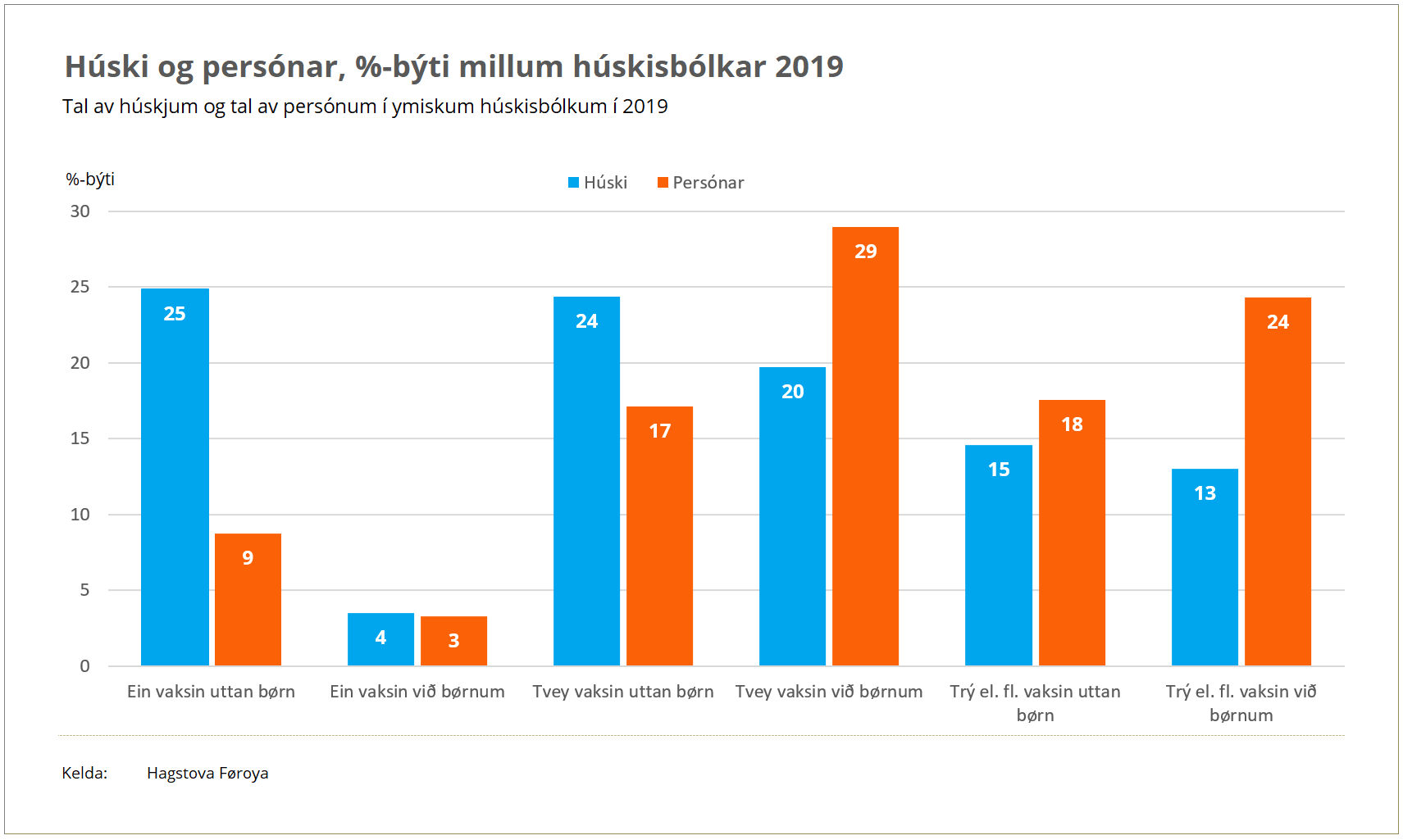 The graph above shows a significant difference in the figures for households compared to individuals and household types. Approximately 64% of households include no children. In contrast, 56% of the population live in households that include children.

The graphs below compare the years 2009 and 2019. A break-down of age-sex composition and household types in 2019 follows. 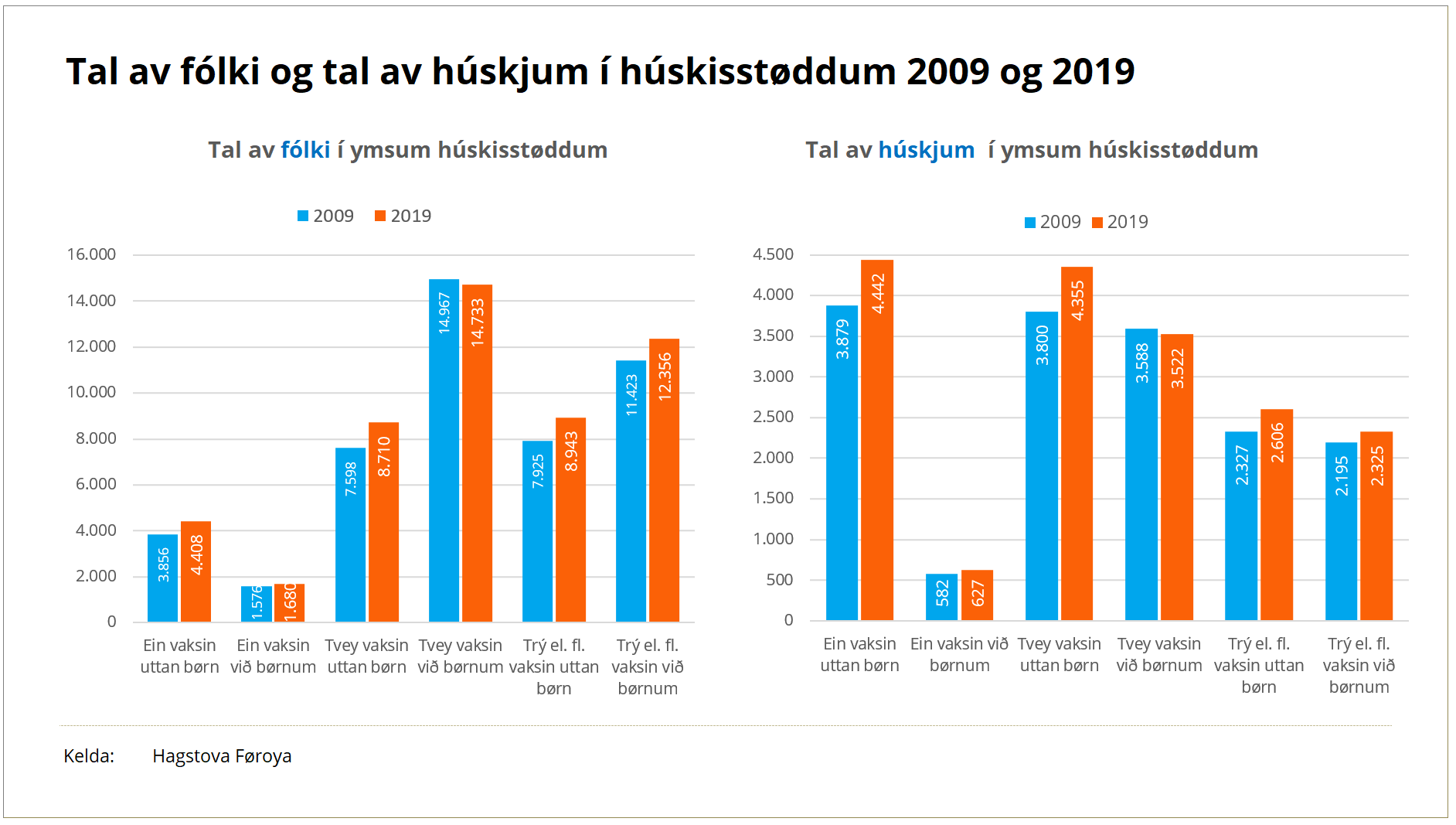 In most of our neighbouring countries, one-person households have a particular interest due to the growing number of people living alone. However, our data shows a departing trend as the number of young adults (aged 18-24) living alone saw a decline. It should be noted that the same age group has also decreased somewhat in size.

All of the other groups have seen an increase, which corresponds to the population growth. In terms of people who live alone, the group that has seen the largest growth are persons aged 67 years and over.

In terms of percentage distribution by sex, there is a stark contrast between specific age groups for individuals living alone, with the very few young single adults being the exception. In the age group 25-54, men living alone (1,051) overwhelmingly outnumber women (358). However, in the age group 67 and over, the trend is reversed, with 757 men compared to 1,199 women.

In summary, young and middle-aged men make out a large majority of individuals living alone. In term of older citizens, women are the majority. 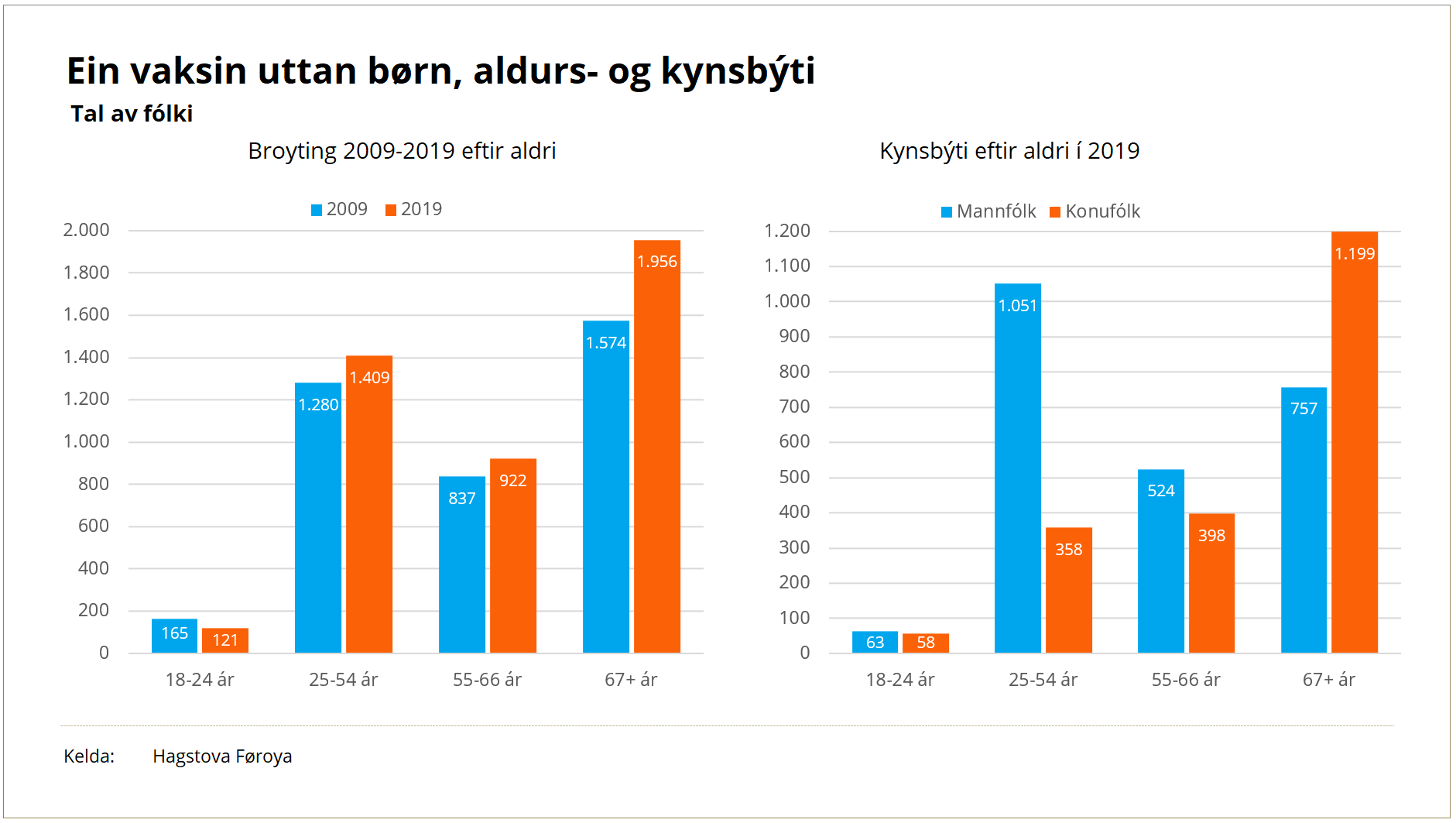 One adult with children

In comparing the total number of one-adult households with children in the years 2009 and 2019, the graph below shows no considerable changes other than the population trend. 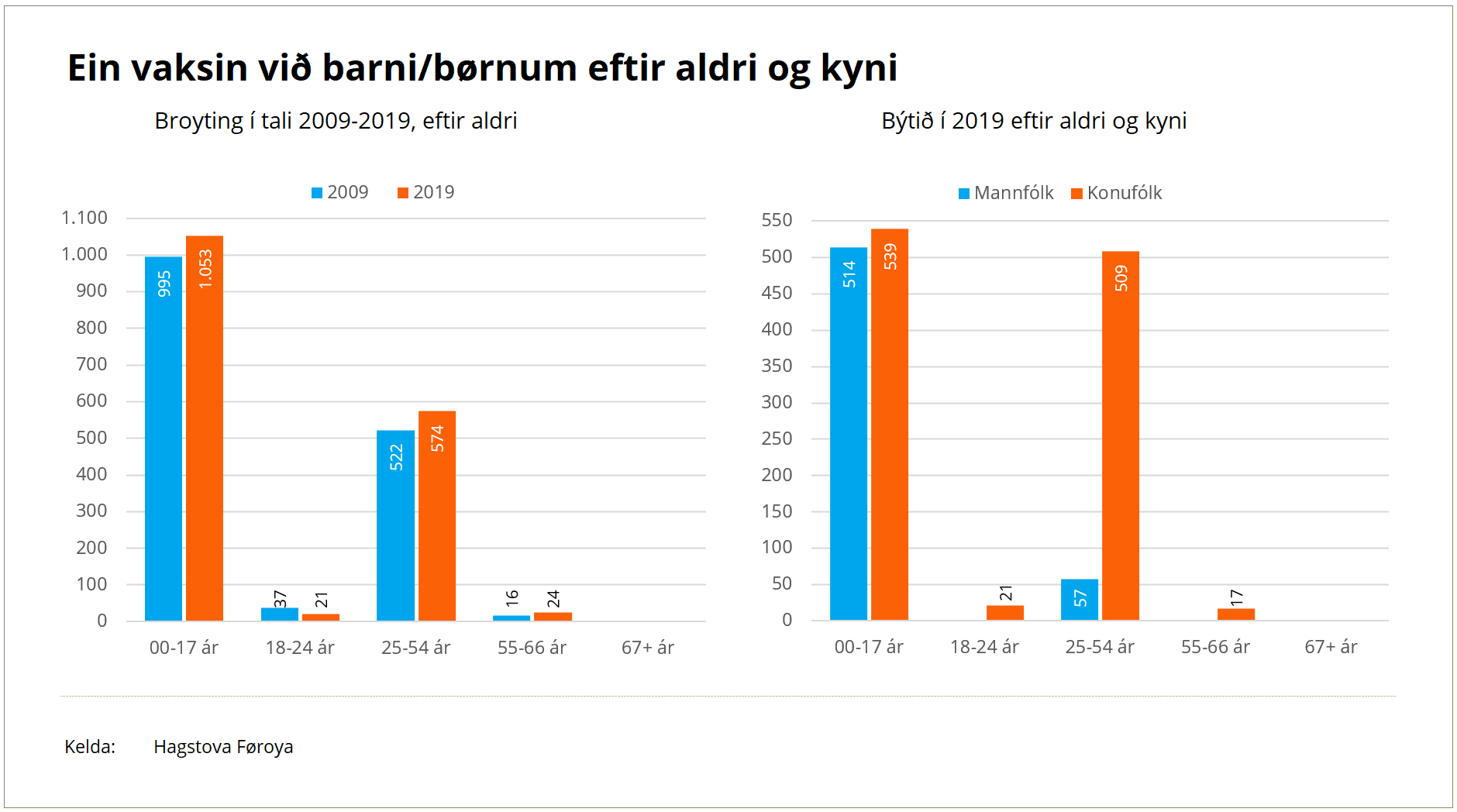 On the other hand, there are stark differences in the percentage distribution by sex. For obvious reasons, the numbers of individuals aged under 18 are roughly equal between both sexes as they are regarded as children. In the age group 18-24, there are very few lone-parent households with children. In all of the lone-parent households with children, however, the parent is a woman. Similarly, in the age group 25-54 the percentage distribution by sex is 90% women and 10% men. 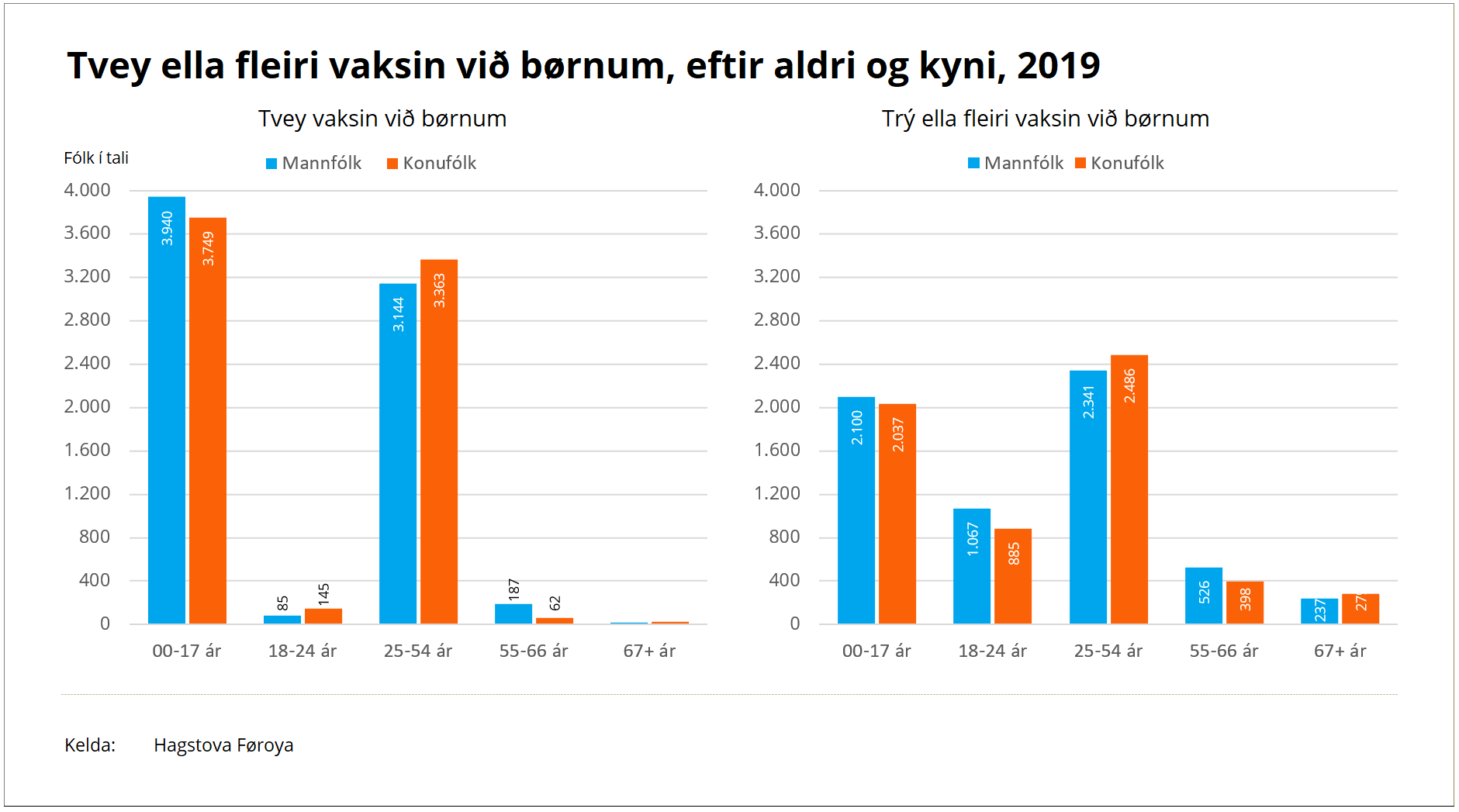 Two or more adults with children

One-third of all households is composed of two or more adults with children, accounting for just over half the population (53%). Roughly speaking, all two-adult households with children are represented in the age groups 25-54 (largely parents) and individuals aged under 18 (their children). In this household type, no more than approximately 250 people are from the age group 18-24 and 55 and over.

Two or more adults without children

The number of households composed of two or more adults without children is relatively high, accounting for 39% of all households, and 33% of the total population.

For two-adult households, the number of household members increases gradually from the youngest age group to the oldest.

In contrast, this trend is reversed for three-or-more-adults households, both in terms of age distribution and distribution by sex. The age group 18-24 is significantly bigger, while the age group 25-54 is the biggest by a margin. The older age groups saw a gradual decline. Notably, in terms of the distribution by sex in the age group 25-54, men (just over 2,200) significantly outnumber women (just over 1,300). A large portion of this age group are likely to be young adults aged over 18 that live with their parents, thus regarded as adults. As the graph below shows, these young people are mostly men. 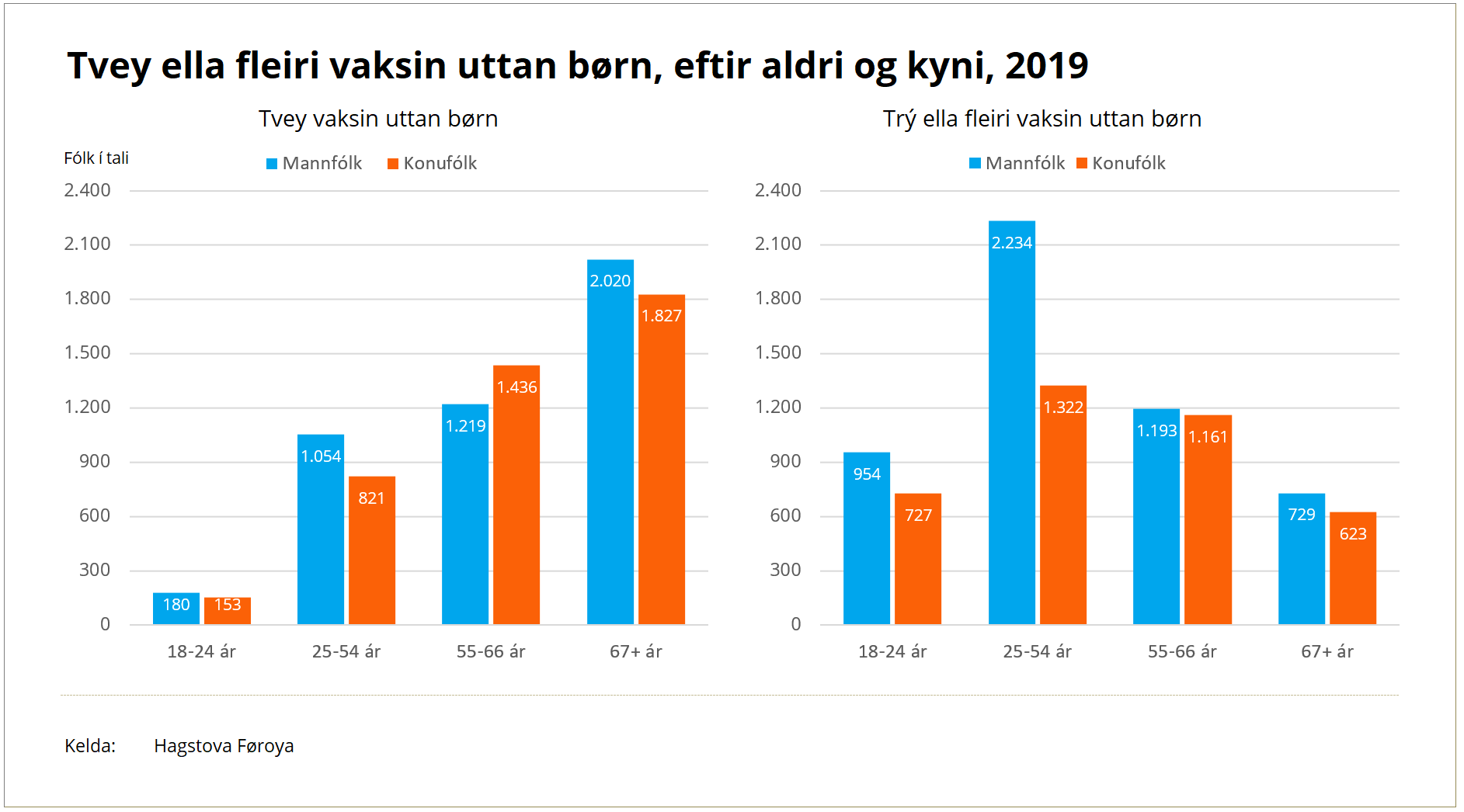 Average number of persons per household 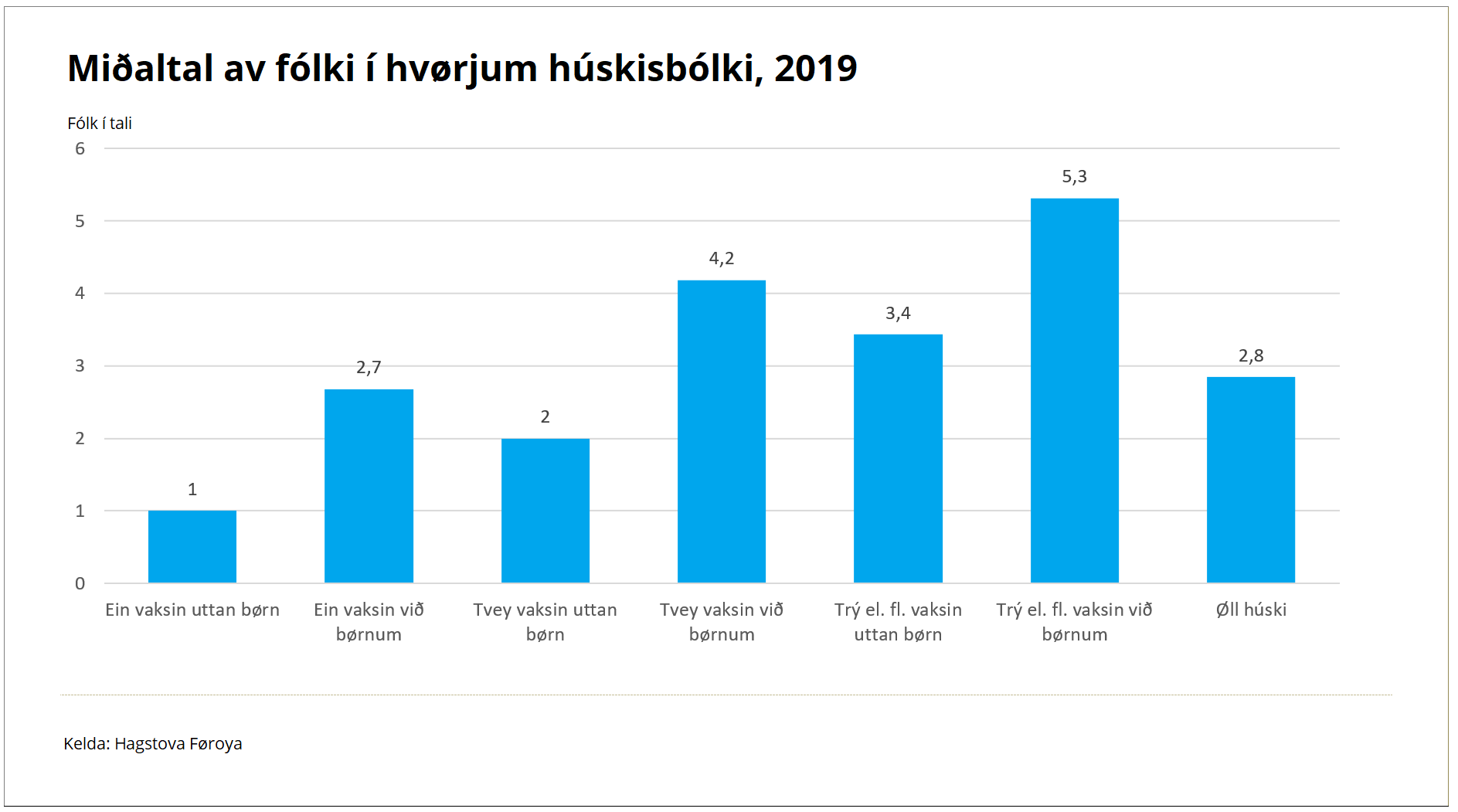 A household is defined as the residents who, as of 31 December of the year, are listed as having the same address in the national register. Residents of institutions or collective living quarters are not included in household statistics. This means that household figures do not represent the total population, though 99.2% of the population are represented in the figures.

An additional requirement for inclusion in a household statistic is that at least one person in the household has been liable to pay tax for the full extent of the year.

One adult and one child