The consumer prices for Q1of 2022 rose by 4.4% from Q1 2021. This represents the most highest CPI change in the course of one year since the global financial crisis of 2009, both in terms of the Faroe Islands as well as globally. 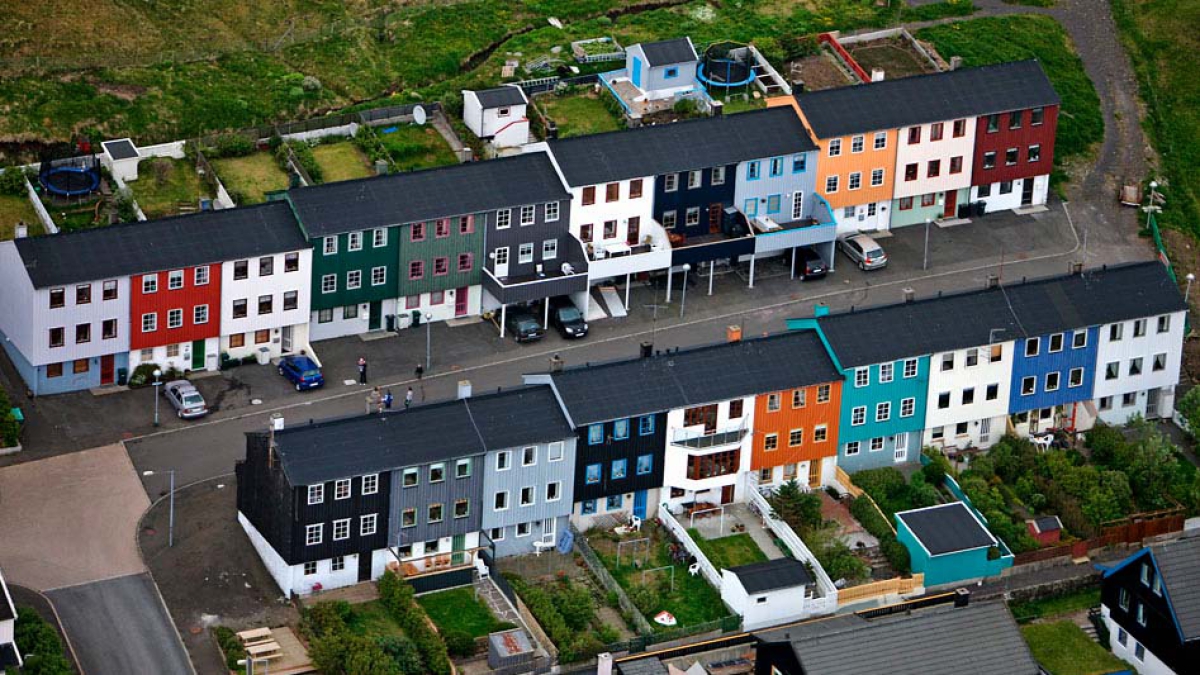 In a single year, prices in 11 out of the 12 main categories of goods and services have increased, while education prices have remained consistent. The spike in ‘Housing’ prices of 14.3% in particular has caused the significant change to the CPI. Then follows the price increase in ‘Furnishing and household equipment’, ‘Communication’ and ‘Clothing and footwear’ by 5.4%, 4.5% and 3.9%, respectively.

Prior to the Covid-19 outbreak, the year-on-year change to the total CPI in the Faroe Islands - as well as in Europe on average – ranged from 1-2%. During the most part of 2020, at the height of the pandemic, the year-on-year consumer prices were all but consistent. The latest CPI surveys in the Faroe Islands and elsewhere in Europe demonstrate a return to a CPI growth, the like of which was last seen before the global financial crisis. 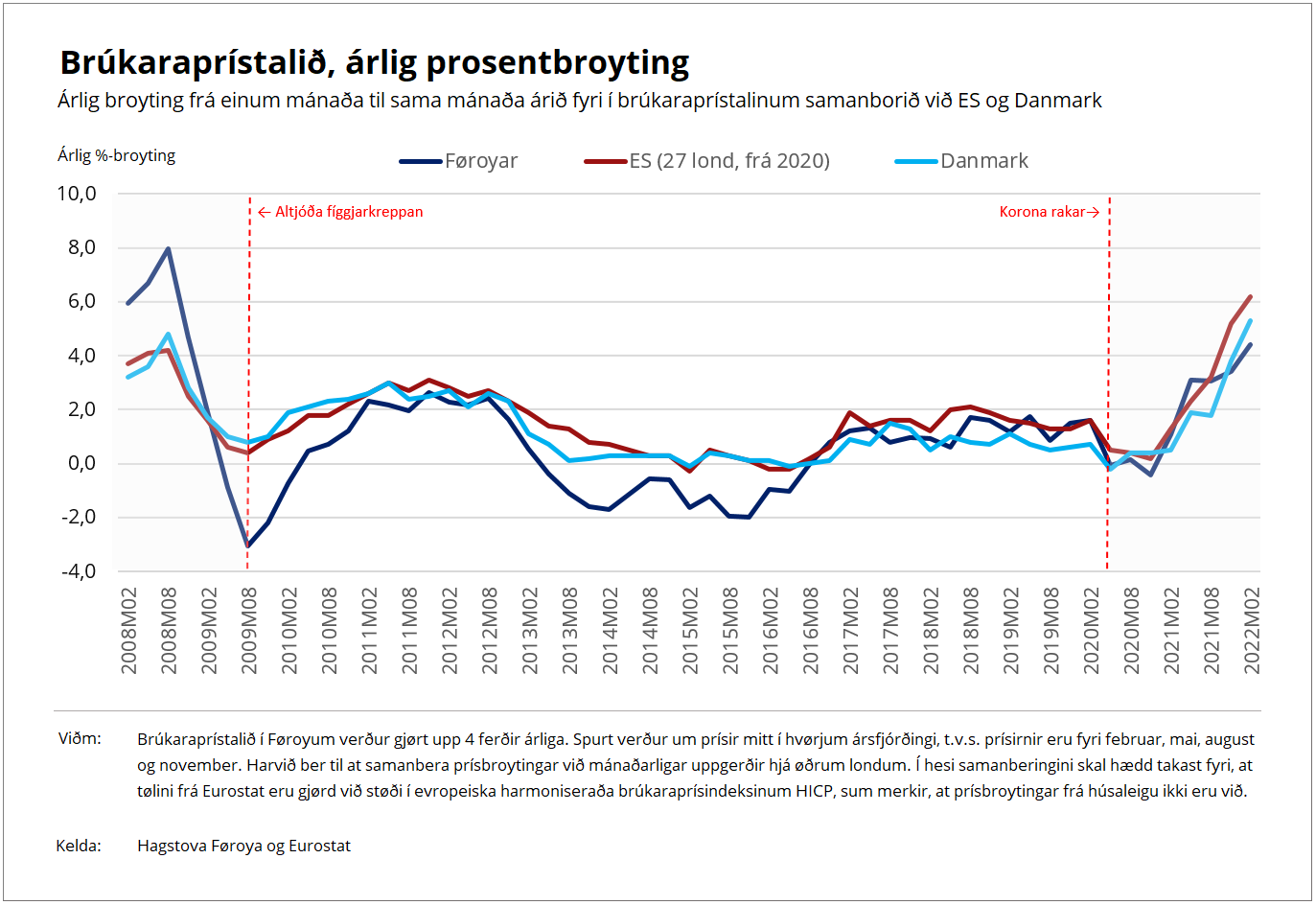 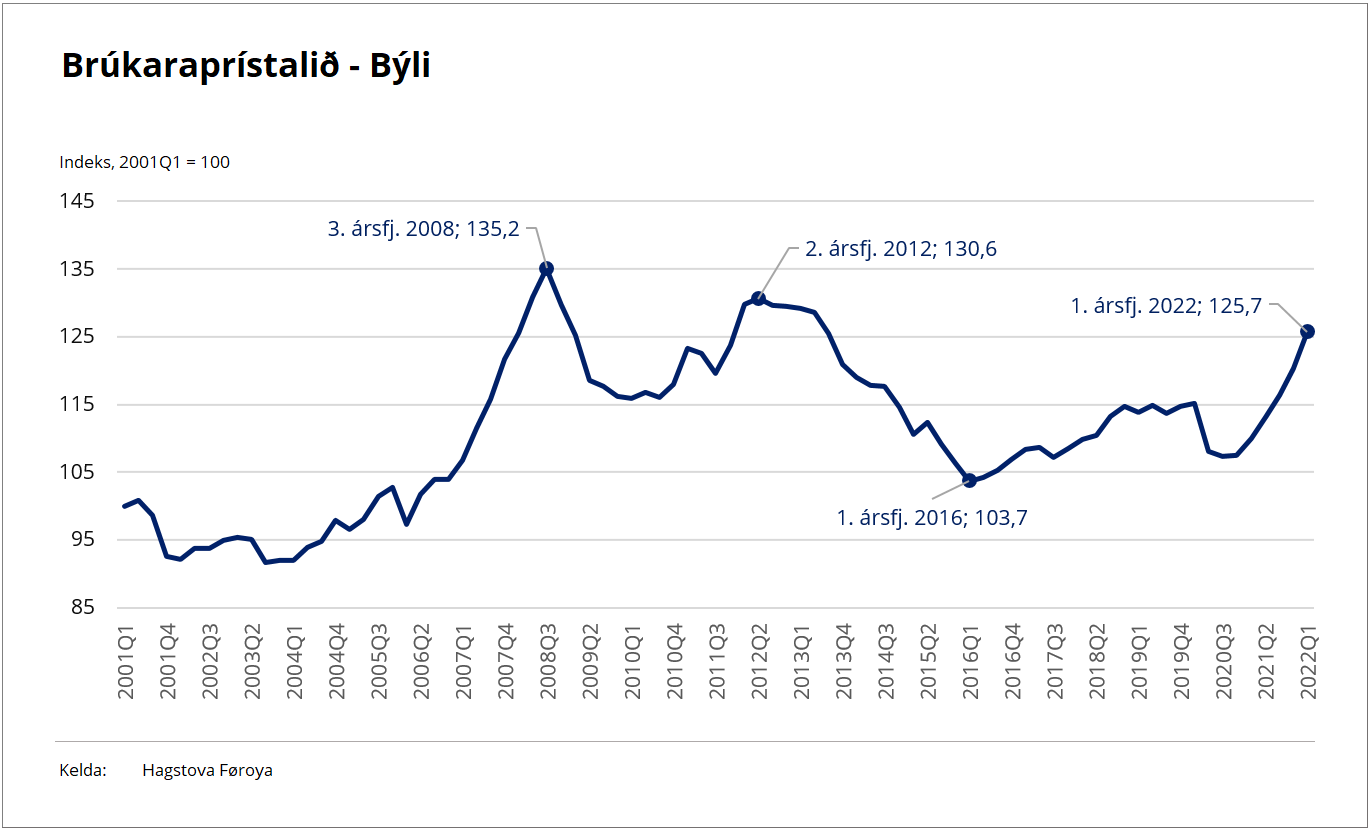 A price hike on liquid fuel for household heating is the key factor in the total price increase in the most recent survey, as was the case in the previous survey. Also significant is the price hike on, for instance, housing maintenance. Along with liquid fuel for household heating, fuel for transport had a relatively strong effect on the total consumption by the average Faroese household.

While prices of liquid fuels for household heating and for transport saw a relatively large reduction during the first year of the Covid-19 pandemic, prices over the past year have returned to a steady increase. Prices on liquid fuel for Faroese households have seen a 40.0% increase in the past year. The EU survey covering the same goods show an average increase of 43.6%. The slower growth in the total CPI in the wake of the pandemic was mainly caused by the relatively big drop in oil prices. At the same time, the relatively significant increase of fuel prices is the main factor in the total CPI increase in the most recent survey. The category ‘Food and non-alcoholic beverages’ has the biggest significance. 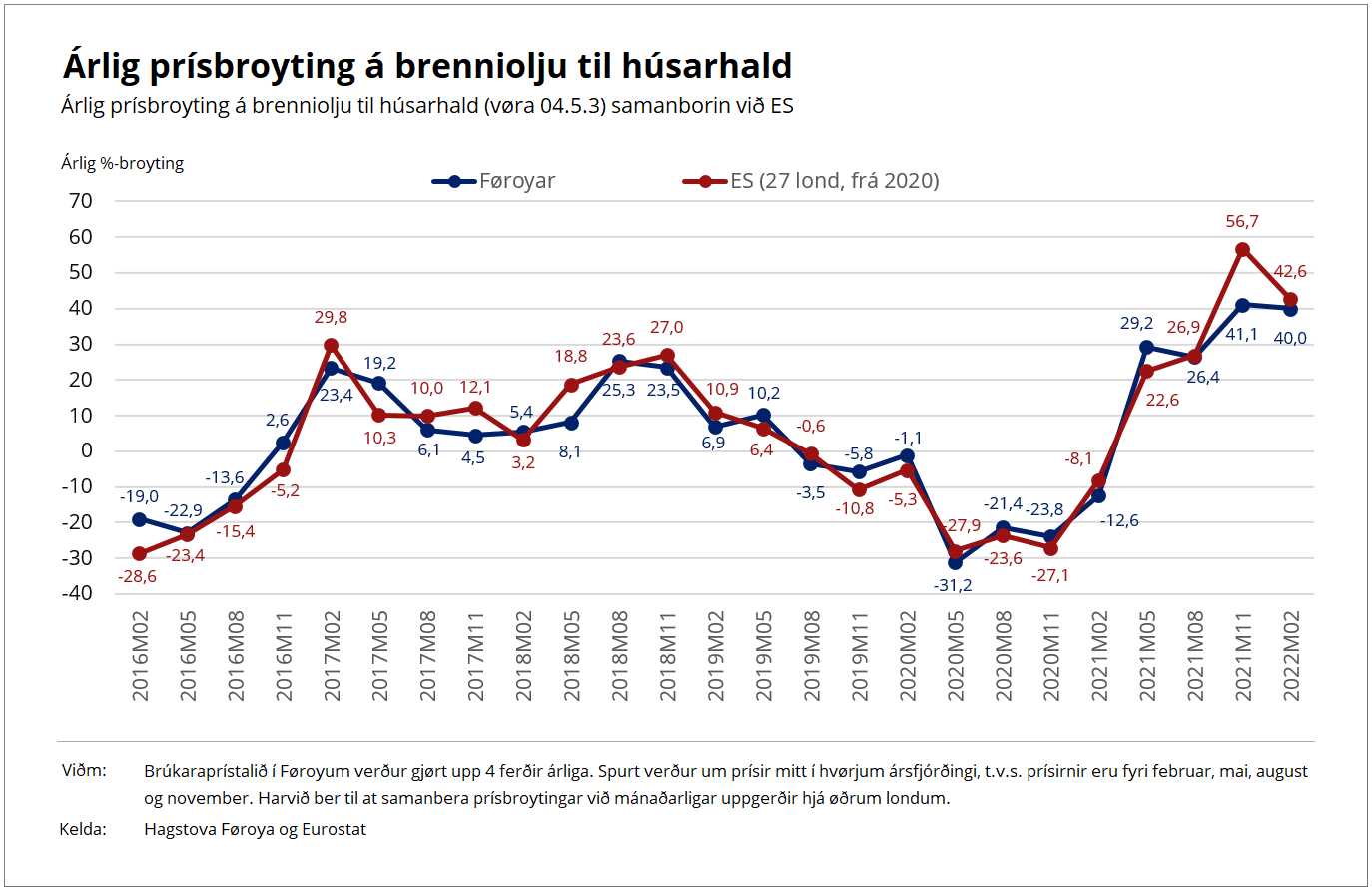 Compared to other countries, the most recent surveyed yearly overall CPI change of 4.4% is on par with Finland, Sweden and Iceland. In Denmark, the yearly CPI change was higher (5.3%), while it was lower in Norway (3.5%). 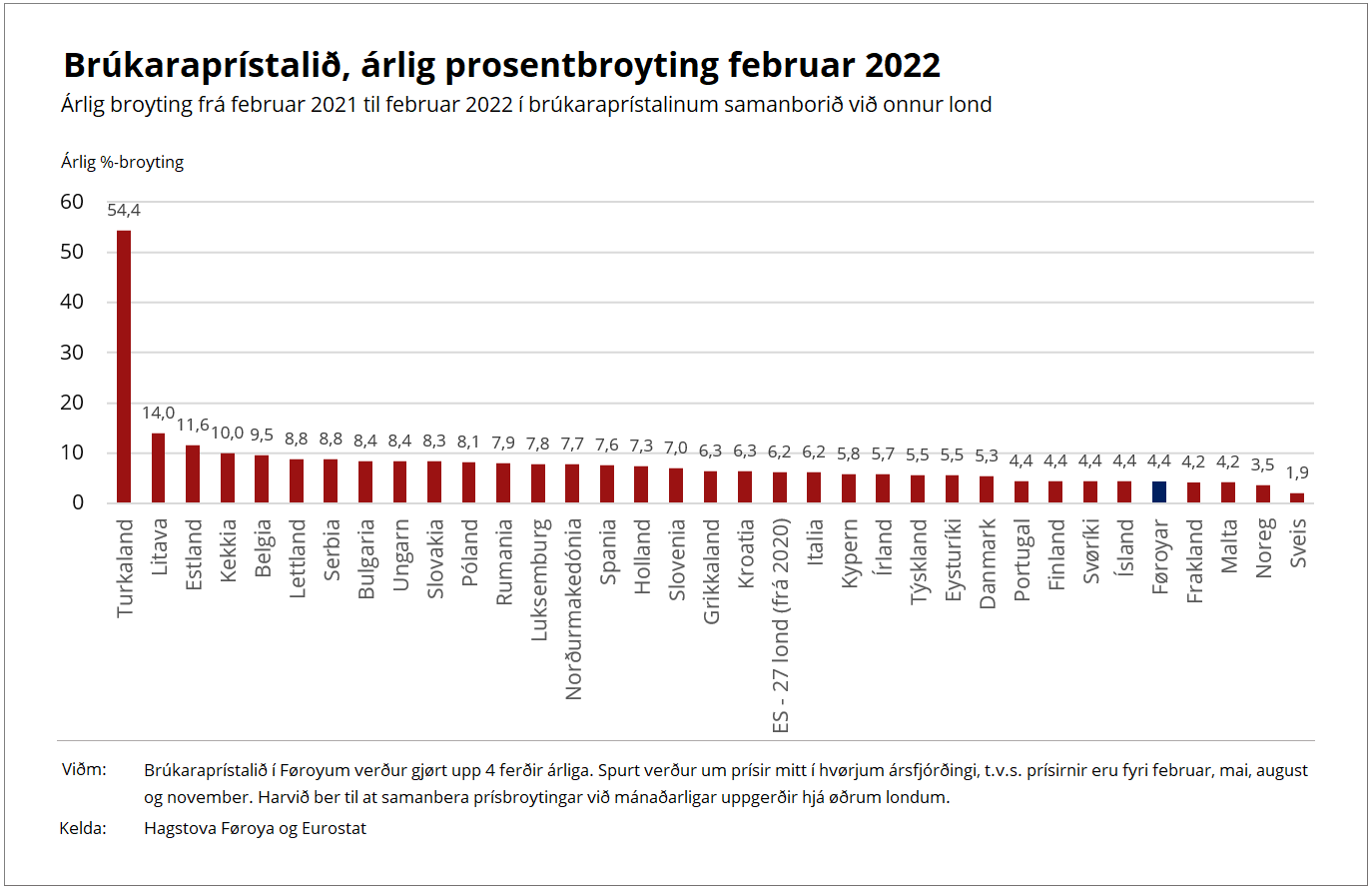 The highest quarter over quarter increase to date

As the most recent CPI survey shows, the average consumer price increase was at 2.3% compared to Q4 2021. This represents the highest increase from one quarter to the next on record. In comparison, the period Q2 to Q3 in 2008, shortly before the global financial crisis, recorded an increase of 2.2%.

The average price for Q1 in 2022 is extracted from prices set out to Statistics Faroe Islands by businesses and institutions mid-February, which is shortly before the Russian invasion of Ukraine.

The Consumer Price Index (CPI) consists of 12 main categories of goods and services. The effect that each category has on the overall price index is weighted according to consumption levels. 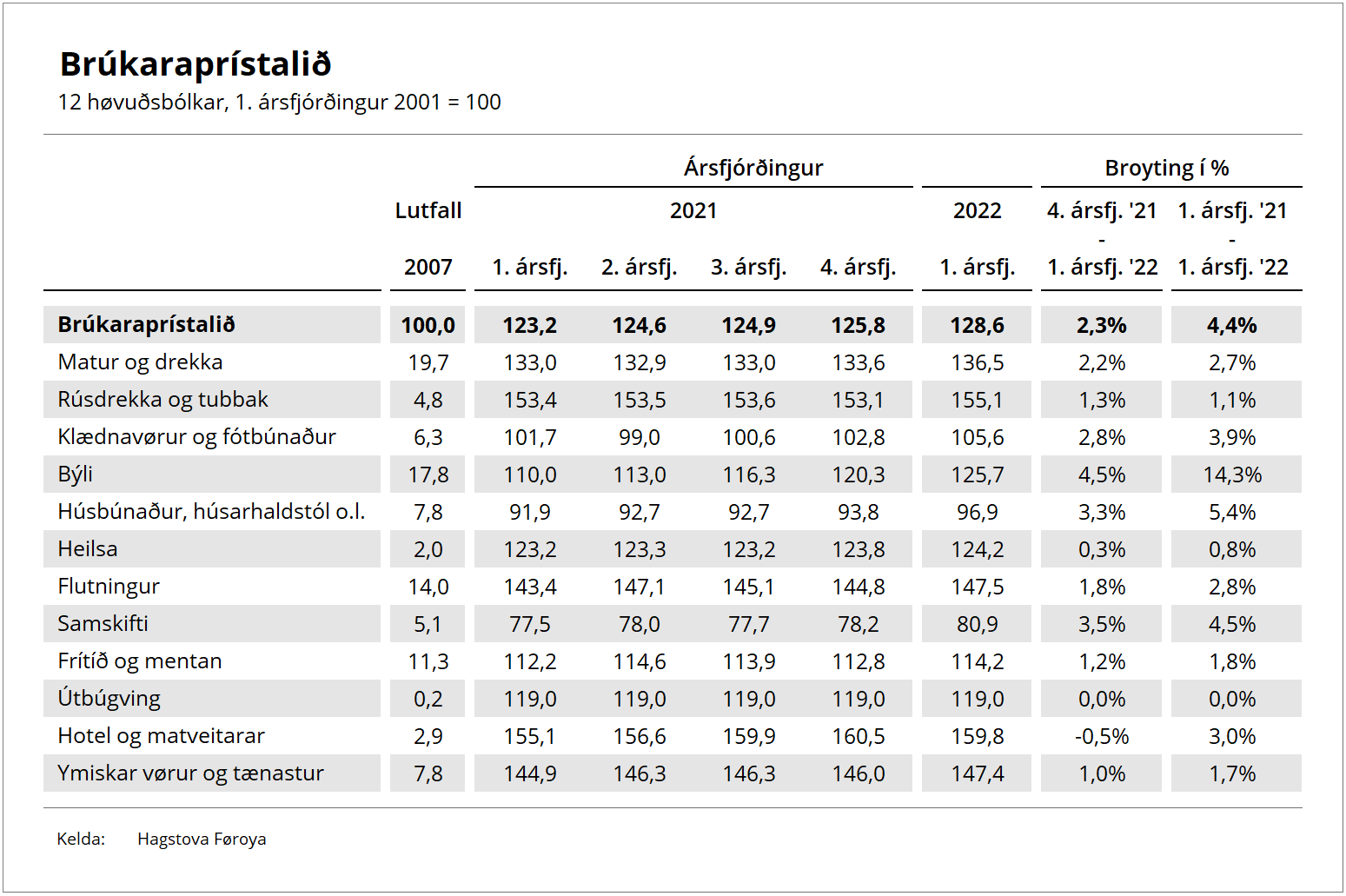