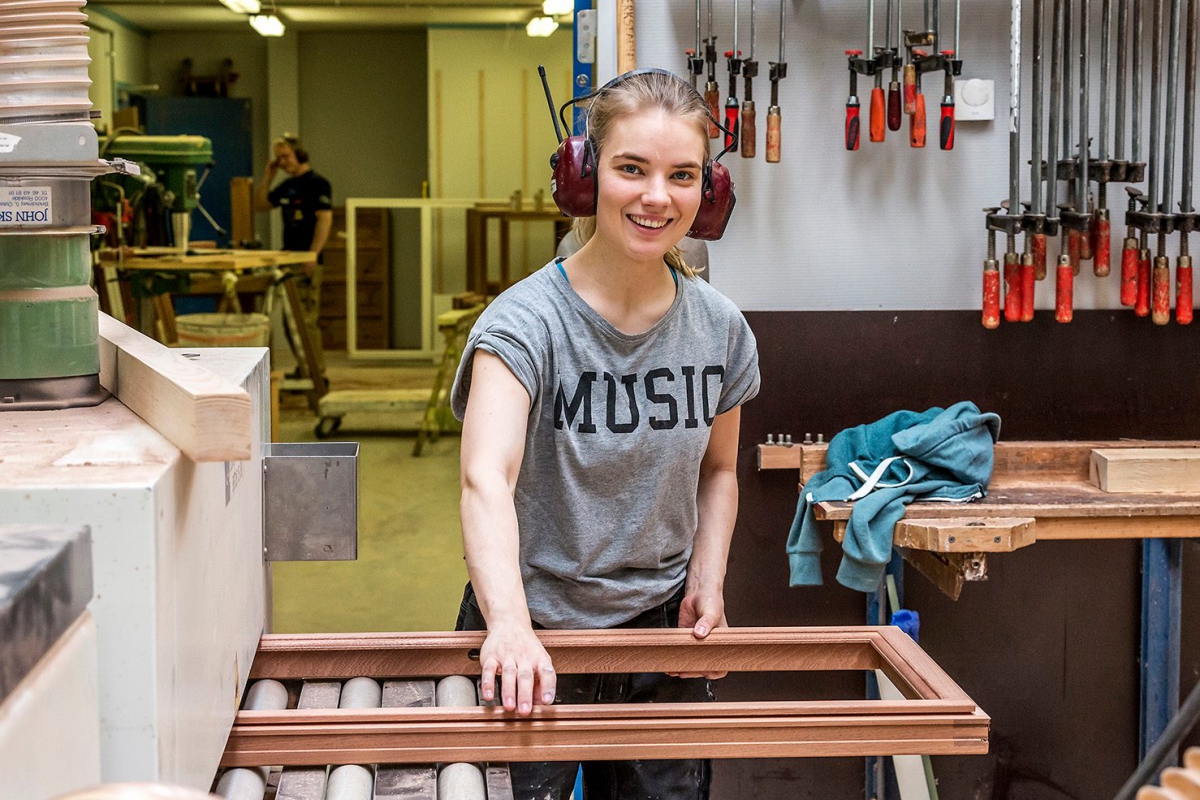 The Faroese labour force has increased by just over 2,000 people in the past five years, spread evenly across the two genders. 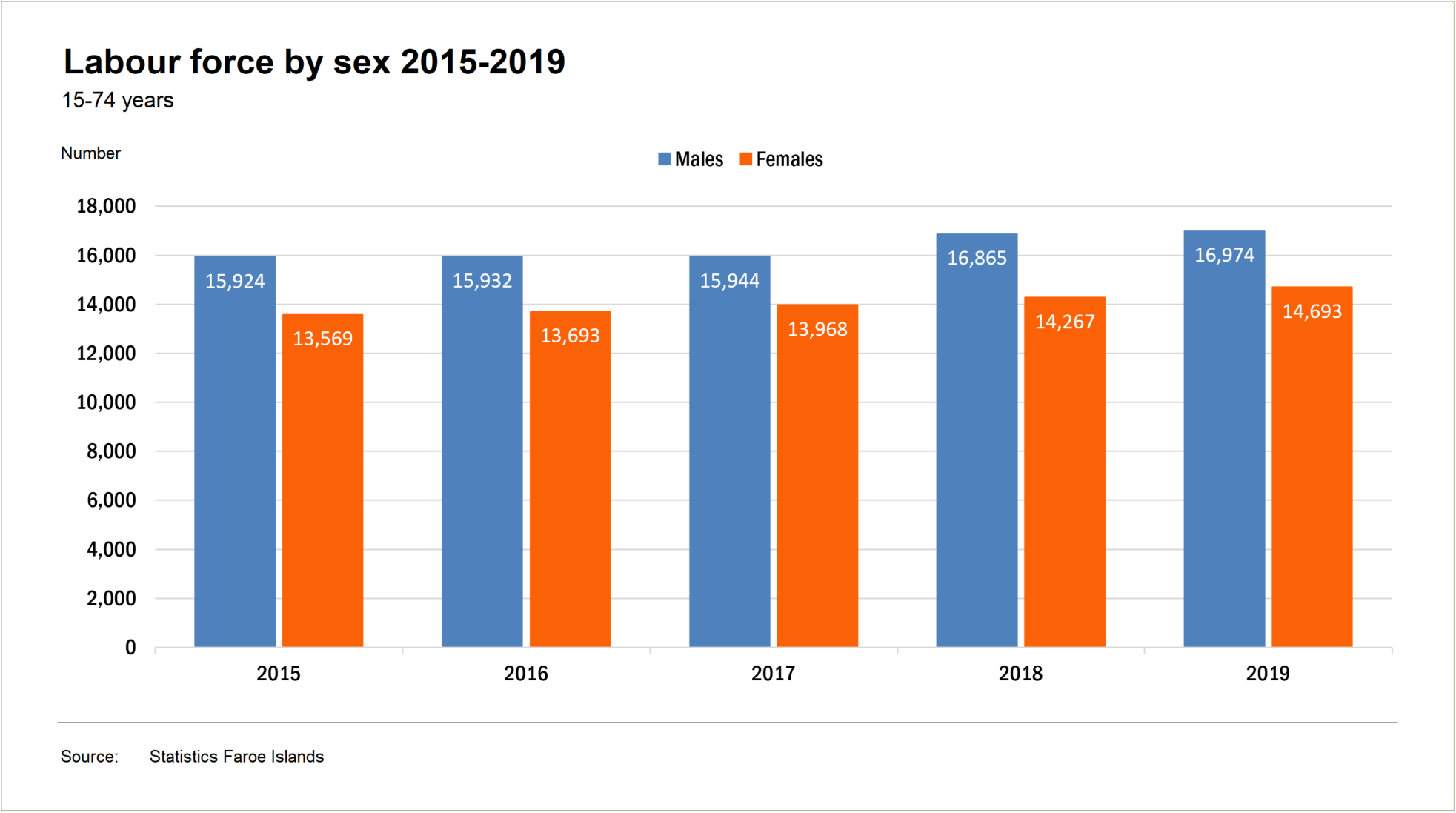 Included in the labour force are all employed individuals, including salary earners, independent traders, employers, unemployed people available for work and individuals who carry out unpaid work for family businesses. Not included in the labour force are young full-time students, people unavailable for work due to disease or reduced ability, or people who have left the labour market due to age or other limitations.

The table below shows the labour force and the activity rate in major regions of the country. Eysturoy has the biggest labour force relative to population, at 88%, followed by Suðurstreymoy at just over 86%. At 79%, Sandoy and Suðuroy make up the bottom of the list. 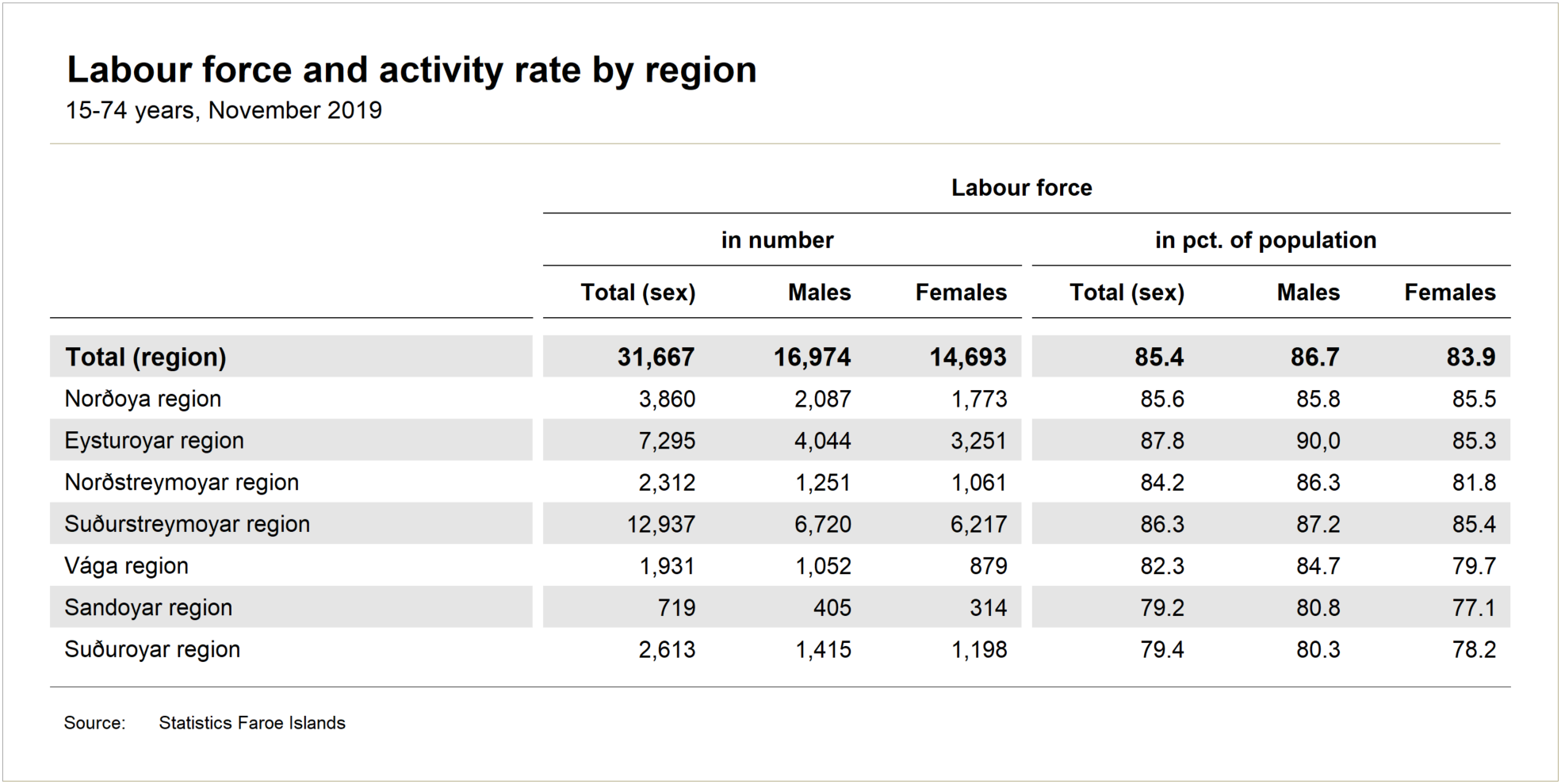 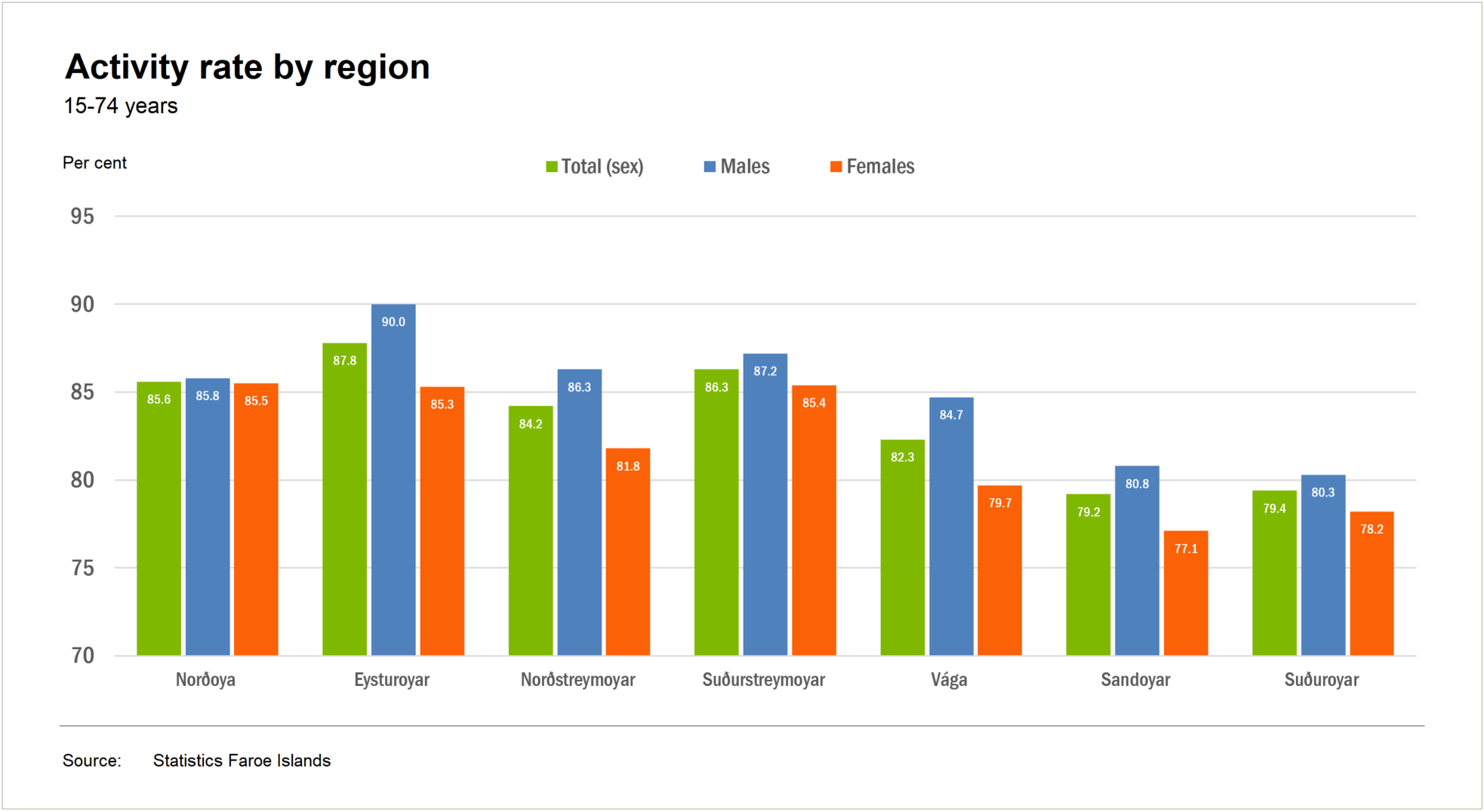 As previous labour force surveys have also shown, the Faroe Islands have the biggest labour force in Europe relative to the population. Only Iceland comes close in this respect.

The chart below, compiled by Eurostat, compares the Faroe Islands with 35 other European nations.

On this list, the Faroe Islands are on top with an activity rate of 85% for both genders combined. Second is Iceland (81%), followed by Switzerland (76%), Sweden (74%) and then Estonia, the Netherlands, Norway, Germany, Denmark, the UK and Lithuania (70-72%).

The average activity rate for the 28 EU member nations (including the UK) is 65%. The European nations with the lowest activity rate are Turkey and Italy, at 56% and 57% respectively. 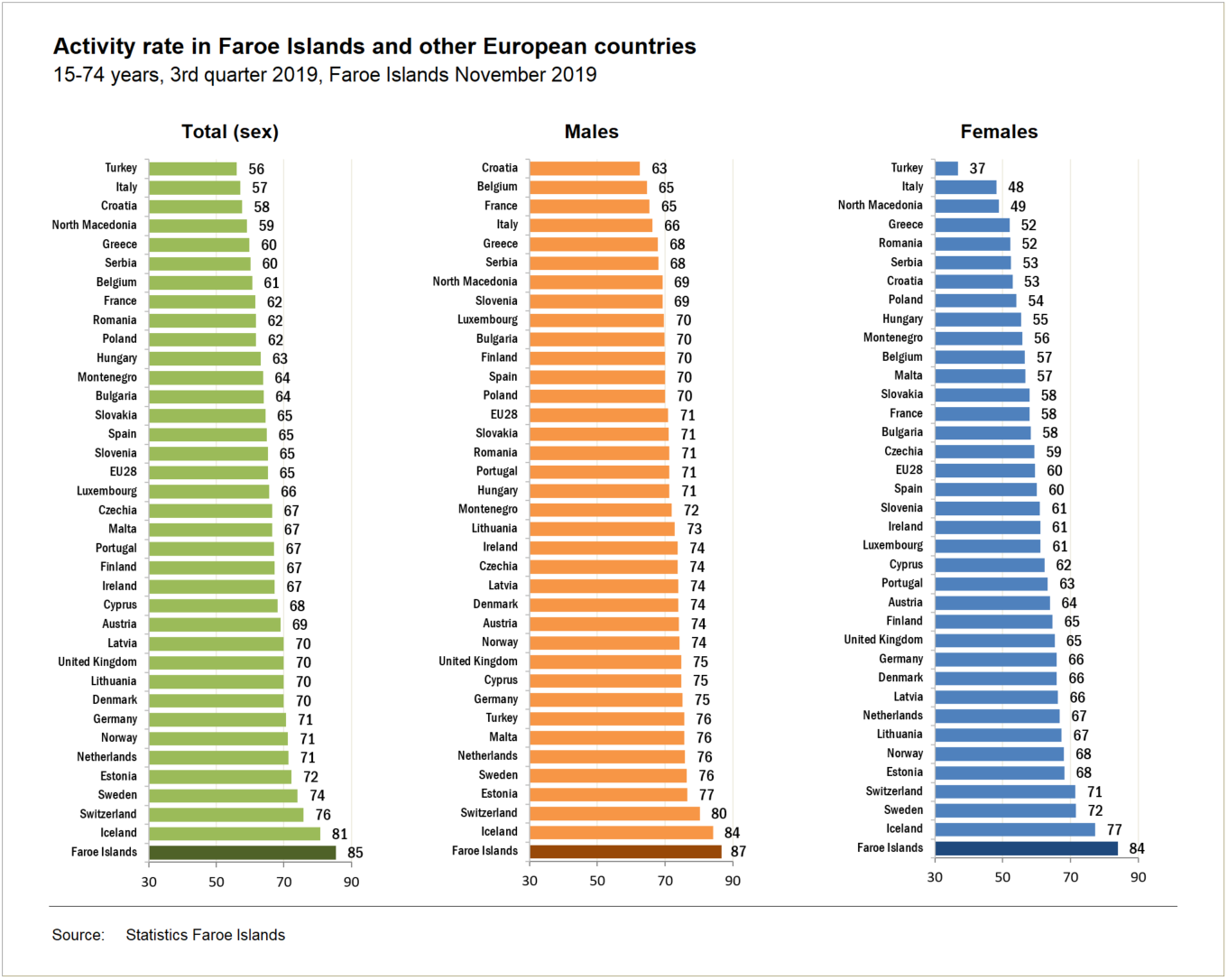 In the Faroe Islands and Iceland, the activity rate reaches 75 percent before the age of 20, compared with 50 percent in Denmark and an EU average of about 20 percent.

The difference is even greater for the older generations, especially the oldest segment, the 65-74 year-olds, who in the Faroes have an activity rate of 50 percent, compared to 35 percent in Iceland and a 10-percent EU average. 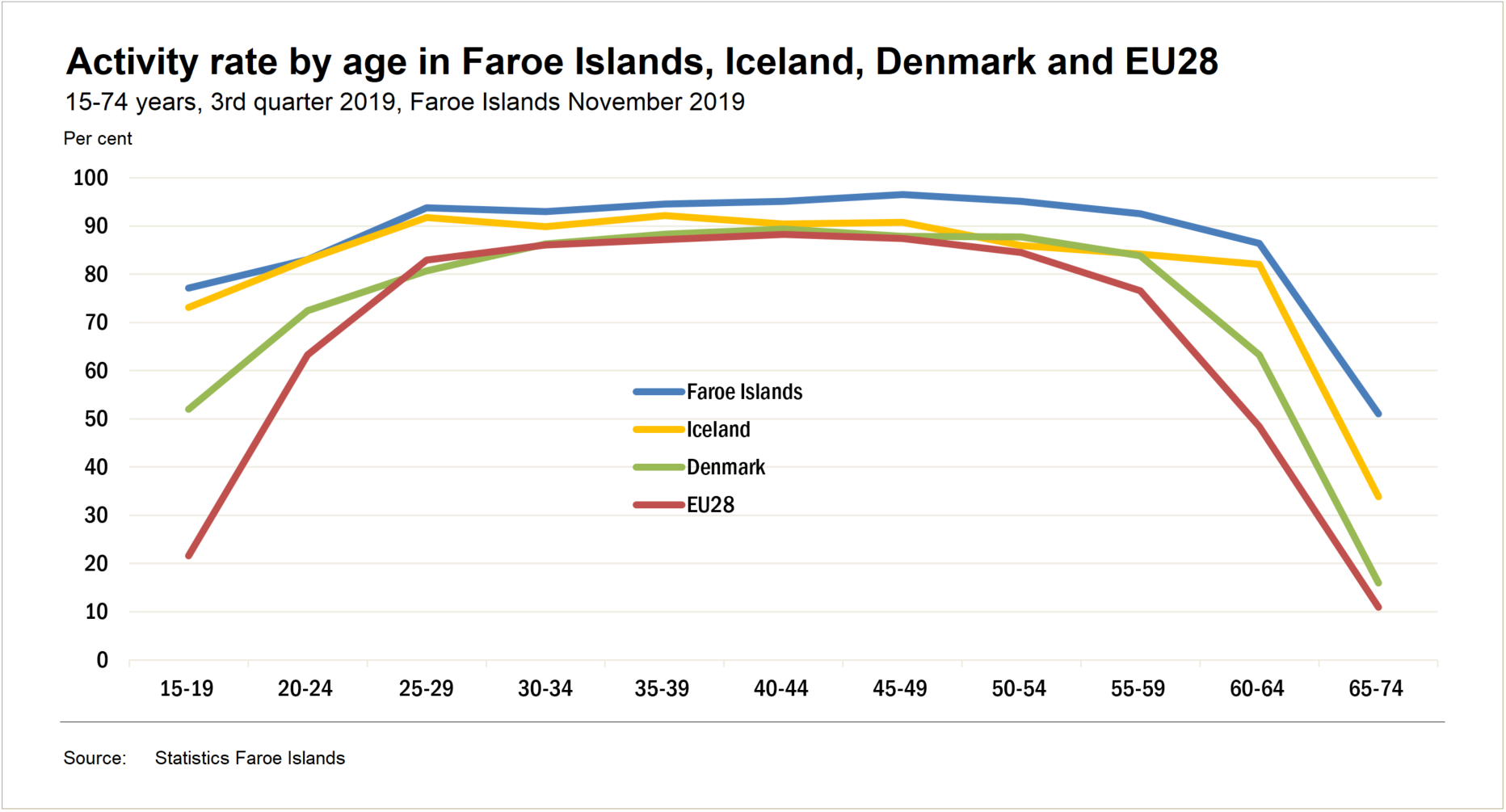 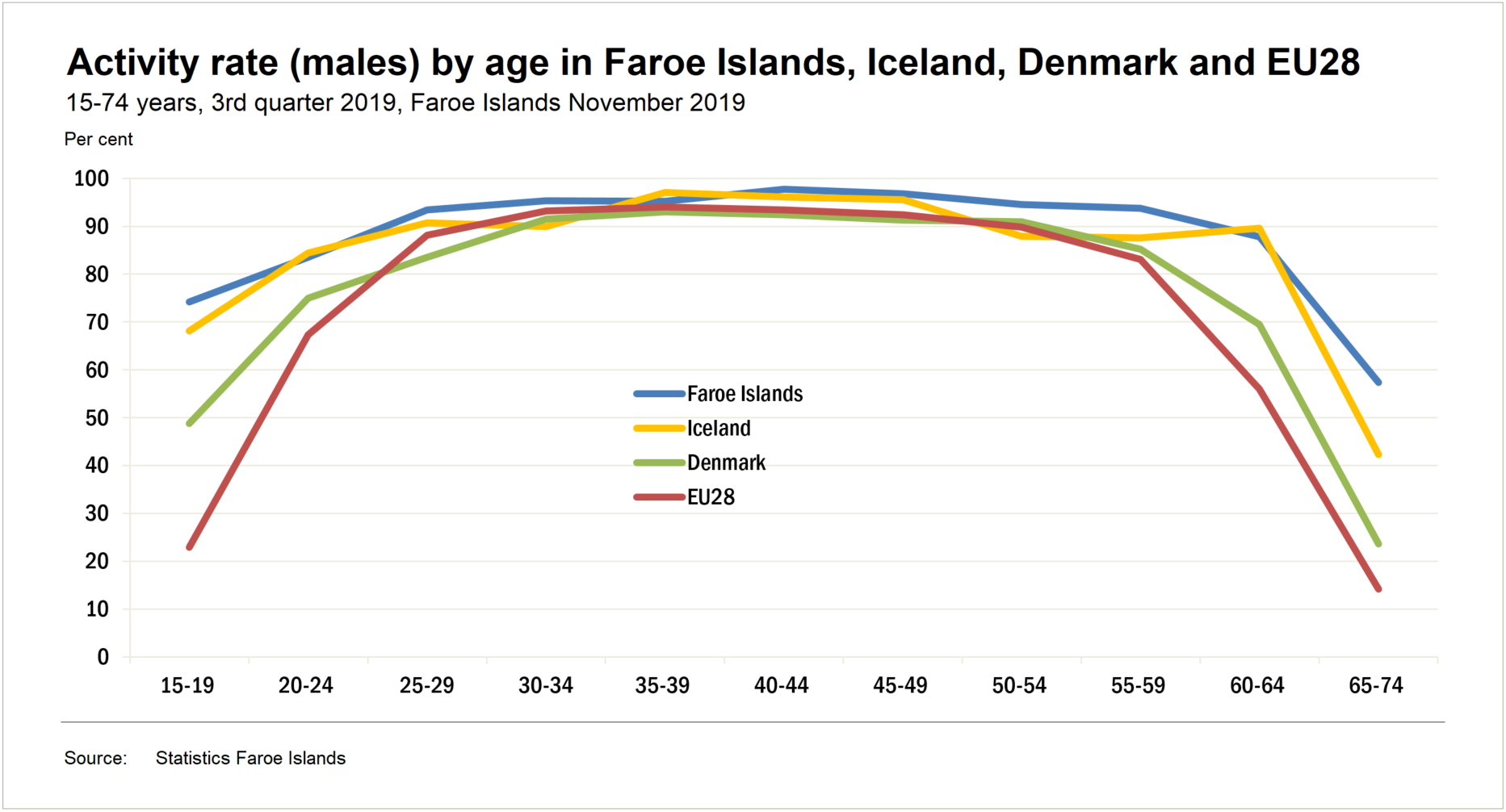 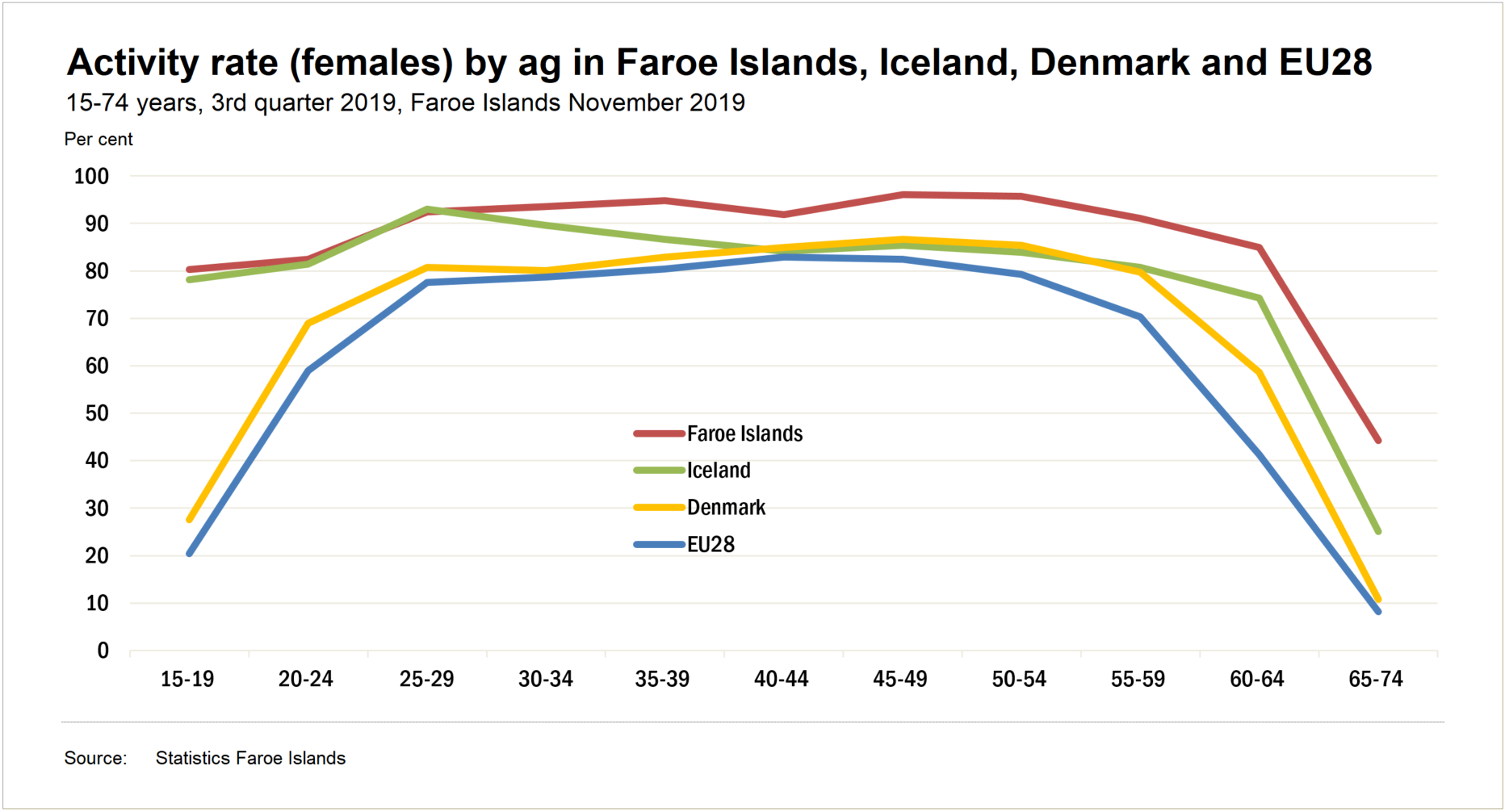 About the labour force survey

The labour force data is compiled in accordance with provisions from the International Labour Organization, an agency under the UN. This ensures that the Faroese figures can be directly compared with corresponding figures from other countries.

The findings are also based on surveys of approximately 1,000 individuals for whom there is insufficient data in the labour force registers. The labour force survey consists of answers from full-time residents in the Faroe Islands aged 15-74. Anyone who spent more than one hour on commercial work in the one-week survey period in November 2019 is classified as engaged in active employment, even if the work was unpaid. Unemployed people are only classified as such if they are actively looking for jobs or are prepared to start work within two weeks. Those who neither work nor are unemployed are classified as occupationally inactive.

After five years of using this survey method, Statistics Faroe Islands this year reviewed its data for the period, which has led to minor changes in the figures from 2015 to 2018. These changes are outlined in brief below.

Prior to 2015, the labour force comprised those aged between 16 and 74. This has now been changed to 15-74. It is believed that this change provides more accurate figures about the 15-year-olds.

The calculation method has also been amended for standardisation purposes.

Changes for the activity rate are as follows: